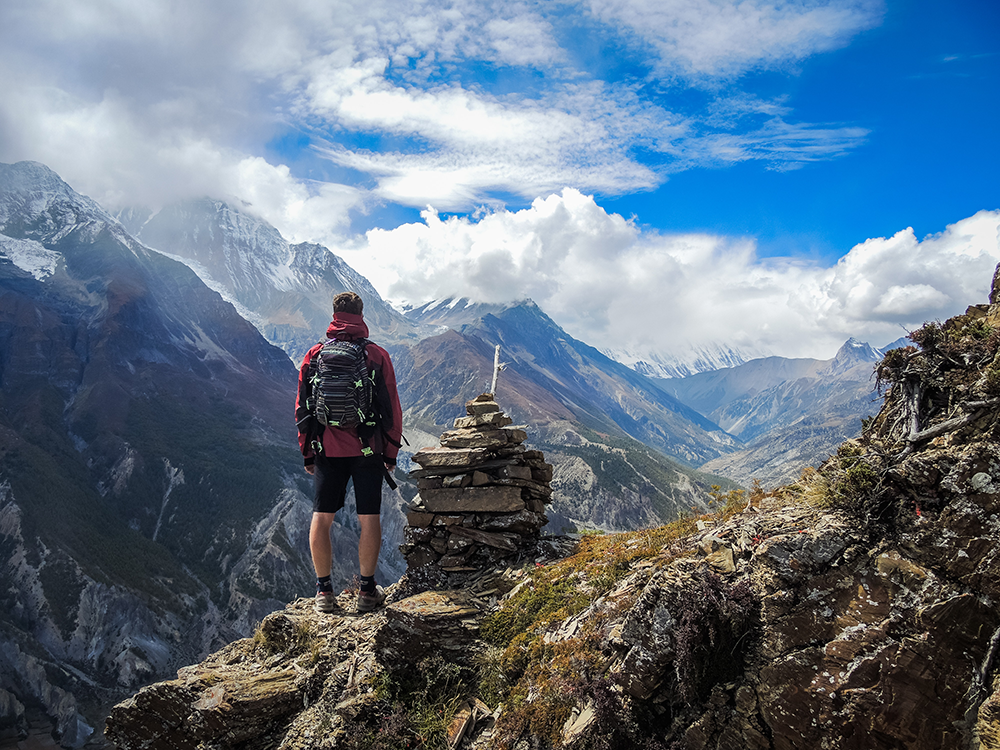 Upon arrival at the Tribhuvan International Airport, our representative will pick you up in our private vehicle and take you to Hotel De’l Annapurna where you will be spending the night

The next morning after your breakfast at the hotel, you will be picked up and driven to the domestic airport to catch your flight to Pokhara (30 minutes) which is Nepal’s second largest city. This flight offers you the stunning views of the Himalayan ranges where you will get to see four mountains; Dhaulagiri, Annapurna, Manaslu and Shishapangma so make sure you get a seat on the right hand side of the plane. Upon landing, you will be picked up taken to your hotel where you will have your lunch. After lunch you could choose to relax by the Phewa lake or you could do some sightseeing in some of the iconic places such as

Devi’s fall: A rather unnatural phenomenon occurs here, the stream of Pardi vanishes underground. It was originally called David’s fall but somehow adapted to native tongue to become named Devi’s fall. There are stories surrounding the lake that a Swiss couple was swept away by the waters when the dam overflowed on Phewa lake

World Peace Stupa: World Peace Pagoda, as the name suggests, is truly peaceful and a perfect escape from the bustling city. The gleaming white stupa was constructed by the Japanese Buddhists and is one of the 80 peace pagodas in the world was built to inspire peace and harmony amongst all races and creed. Perched on a hill which commands the best views of the Himalayan peaks as well as the Phewa lake, the pagoda is easily a tourist favorite.

After an early breakfast, we will drive to Kimche on a 4WD Jeep. This is where we will begin our trekking journey to Ghandrung which is one of the largest Gurung villages, one of the ethnic groups in Nepal. The trail ascends along stone-paved steps and through forests of rhododendron, orchids etc. The trek will take about 1.5 hours. After lunch, you are free to explore the village. The village offers splendid views of the majestic mountains of Annapurna, Machhapuchhre and Himchuli. Once you reach the top, you can go horse riding and visit the traditional tea shops and the Tibetan monasteries. You can even take pictures in the traditional Gurung attire.

The view at Ghandrung is amazing and you can never get enough of it. Wake up early to enjoy the Annapurna mountain circuit. After our breakfast, we will begin our trek to Tadapani. It is a 5 to 6 hours trek. The name Tadapani literally means “far water” in Nepali which came about because back then the water source was far away from the village. Of course times are different now. The uninterrupted view of the Annapurna range is totally worth the climb. On the way you will pass through Deurali Danda as well. Lunch and dinner will be served at the Tadapani Local lodge.

I hope you are well rested for today because we will be trekking to Ghorepani which will take about 5-7 hours depending on your speed. The village is surrounded by spectacular views of the mountain range which is why it is so popular with the trekkers.  Lunch will be provided in route while dinner will be served at the lodge

Poon Hill trek is a popular trek of the Annapurna region. This place offers one of the best sunrise views in the entire Annapurna region. The golden hue of the rising sun is cast upon the snow-capped mountains of Dhaulagiri, Annapurna and Machhapuchhre to name a few which leaves you astounded at the beauty. It’s worth every grueling step you took. You can grab a cup of masala tea for some warmth and enjoy the view. After taking in all the beauty you will hike back to Ghorepani for breakfast. The rest of the day can be spent exploring the village.

After breakfast, we will trek to Sikh which will take around 4 hours. Sikha is not really a normal stop along this trail. There are a few guesthouses here. Unlike the other somewhat commercialized villages that have all the touristy amenities, Sikha was a proper functioning village where farmers spend the afternoon milking cows, feeding goats and doing other chores. After lunch you can walk around the village and see the farmers and villagers going about their day.

Your destination for today will be Tatopani. Tatopani translates to 'hot water' in Nepali and this village got its name from the natural hot springs that emanate from the rocks beside the Kali Gandaki River. This place is popular among locals who seek comfort from pain as the boiling water is said to have medicinal and healing powers. It is a good place to stop by for people who are suffering from rheumatism and muscle and stiffness and rehabilitation. In the evening, you can soak your exhaustion away at the hot springs and recharge your muscles

The next morning after breakfast we will drive to Sinha Tatopani and if time allows you can soak in the hot springs again. After lunch, you will be driven back to Pokhara and lunch will be served. You are free to explore the city on your own for the rest of the day.

This will be our last day in Pokhara and before we leave, we will make a quick stop at the International Mountain Museum. The museum is dedicated to the mountains of Nepal. Inside you will get to learn more about the Himalayas from the famous peaks and the people climbed it, the geological formation, biodiversity of the mountains to the history and culture of the people who live on the mountains.

After lunch you will make your way to the domestic airport to catch your flight to Kathmandu. Upon arrival in Kathmandu, you will be checked into the hotel. For dinner, we will be trying the local cuisine at Baithak restaurant. This restaurant is located in Barber Mahal, a Victorian inspired palace. The ambience exudes royalty and diners are served by waiters dressed in royal costumes. The restaurant also provides cultural shows.

Today is your last day in Kathmandu and for some last minute sightseeing, the Kathmandu Durbar square offers plenty to see. Also known as Hanuman Dhoka, this palace square is a UNESCO World Heritage Site. It was named after Hanuman, the monkey god and has statues of Hanuman that is said to protect the palace by standing guard right at the entrance. Within the palace is the residence of the living goddess Kumari known as Kumari Bahal. Young pre-pubescent girl from the town is chosen to be the living goddess and a glimpse from these Kumaris is believed to bring good fortune. With the palace square, there are prominent temples such as the Kal Bhaira. Kal literally means death and Bhairav is the vicious form of Lord Shiva. Together it literally stands of “Lord of death”. The temple served as a supreme court back in the 6th century and anyone found lying in front of the temple would die by the powers of the lord. After you are done exploring the palace, you will proceed to have lunch at Hotel sunset. Once lunch is over, you will taken back to the hotel where you can pack your things or rest before you check out at 5pm to catch a flight back home.