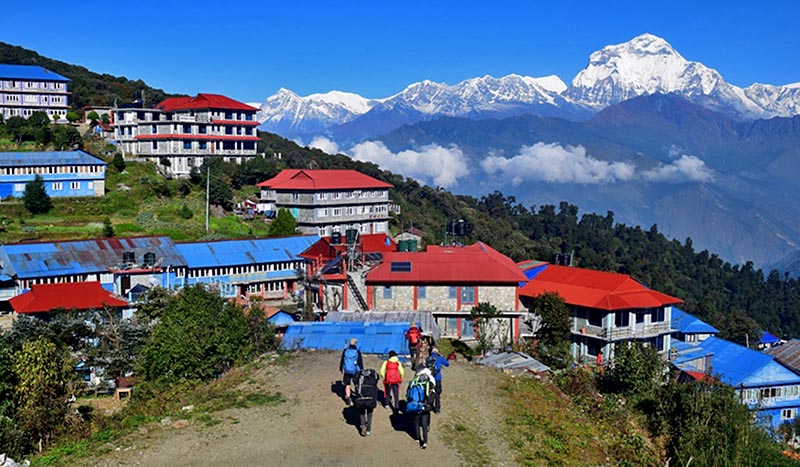 Almost perfect? Tell us what could make this your dream trip?

Upon arrival at the Tribhuvan International Airport, our representatives will pick you up in our private vehicle and take you to Hotel Soaltee Crowne Plaza where you will be spending the night

After breakfast, you will be transferred to the airport to catch a flight to Pokhara. Once you arrive, you will be taken to your hotel and lunch will be served. Pokhara is the second largest city in Nepal after Kathmandu. It is one of the best places for a holiday as it has everything you would want from spectacular sceneries, adventure activities to limitless accommodation and dining options. You can take a relaxing stroll around Phewa lake, the second largest lake in Nepal and you will find many wooden boats that are great for a short tour around the lake. During clear weather, you will see the reflection of the Himalaya peaks on the lake surface. Devi’s Falls is one of the many places one can visit. A rather unnatural phenomenon occurs here, the stream of Pardi vanishes underground. It was originally called David’s fall but somehow adapted to native tongue to become Devi’s fall. There are stories surrounding the lake that a Swiss couple was swept away by the waters when the dam overflowed on Phewa lake. Another place to visit is the International mountain museum, dedicated to the mountains of Nepal. Inside you will get to learn more about the Himalayas from its geology to history. You can also visit the World Peace Pagoda. As the name suggest, it is truly peaceful and a perfect escape from the bustling city. The gleaming white stupa was constructed by the Japanese Buddhists is one of the 80 peace pagodas in the world. Perched on a hill which commands the best views of the Himalayan peaks as well as the Phewa lake making it a popular tourist destination. These are some of the many options of places to visit in Pokhara.

Your actual trek will finally begin today. After breakfast you will move to Nayapool where you hike to Ghandrung will commence. The trek should take 6 hours. Ghandrung is one of the largest Gurung village, one of the ethnic groups in Nepal. The trail ascends along stone-paved steps and through forests of rhododendron, orchids etc. The village offers splendid views of the majestic mountains of Annapurna, Machhapuchhre and Himchuli.

After breakfast, we will begin trekking towards Tadapani. The name Tadapani literally means “far water” in Nepali which came about because back then the water source was far away from the village. Of course times are different now. The uninterrupted view of the Annapurna range is totally worth the climb. The trek is about 4 hours and in between there will be a lunch break and of course you can catch your breath as well. After lunch, the hike towards Tadapani will continue.

Today you will be trekking to Ghorepani which will take about 4 hours or longer depending on your speed. The village is surrounded by spectacular views of the mountain range which is why it is so popular with the trekkers.  Lunch will be provided in route while dinner will be served at the Ghorepani lodge.

Today we will be trekking to Poon Hill, a popular location to observe the Annapurna region. This place offers one of the best sunrise views in the entire Annapurna region. The golden hue of the rising sun is cast upon the snow-capped mountains of Dhaulagiri, Annayou purna and Machhapuchhre to name a few which leaves you astounded at the beauty. It’s worth every grueling step you took. You can grab a cup of masala tea for some warmth and enjoy the view. After taking in all the beauty you will hike back to Ghorepani for breakfast. The rest of the day can be spent exploring the village.

Your destination for today is Tikhedhunga, a common overnight stop for trekkers in this region. After a hearty breakfast, you will begin your climb.

This will be your last trek on this trail. Following the trail of Birethanti, you will pass by streams and pass through paddy fields and maize farms. You will trek uphill and downhill through the forests and farms before you finally reach Nayapul. From Nayalpul, you will be driven to Pokhara. You can spend the day exploring places you did not get to on your first day or just spend your time in the hotel recuperating from the long trek.

After breakfast, you will transfer to the domestic airport to catch a flight to Kathmandu. Our representatives will pick you and drive you to your hotel and get you settled. Once you are settled, you will be taken to your lunch spot. After lunch, you will spend the rest of the day exploring the city.

The Kathmandu Durbar square offers plenty to see. Also known as Hanuman Dhoka, this palace square is a UNESCO World Heritage Site. It was named after Hanuman, the monkey god and has statues of Hanuman that is said to protect the palace by standing guard right at the entrance. Within the palace is the residence of the living goddess Kumari known as Kumari Bahal. Young pre-pubescent girl from the town is chosen to be the living goddess and a glimpse from these Kumaris is believed to bring good fortune. With the palace square, there are prominent temples such as the Kal Bhaira. Kal literally means death and Bhairav is the vicious form of Lord Shiva. Together it literally stands of “Lord of death”. The temple served as a supreme court back in the 6th century and anyone found lying in front of the temple would die by the powers of the lord. After you are done exploring the palace, you can visit another popular place which is Swoyambunath. Also known as the monkey temple, it is an important pilgrimage site for Buddhists. The whitewashed dome represents the earth while the thirteen tiers above represent the 13 stages to nirvana. Visiting the stupa is considered equivalent to meeting the Buddha in person. The stupa is said to bring in peace and heal people from all kinds of physical and emotional difficulties. Thousands of prayer flags flutter above the stupa which contains the sacred mantras that are carried to the heaven by the wind.

If you still have time to spare before dinner, you can visit Thamel Marg. Thamel is probably the most popular tourist spot amongst not just tourists but the locals as well. There are tons of restaurants to chill in, souvenir shops, hiking stores. You will even face street vendors trying to sell all kinds of trinkets. If you would like to buy some souvenirs, you can check out pashmina scarves which are a staple in Thamel. These scarves are made from hair of the goats found deep in the Himalayas. The more goat hair there is, the more expensive it is and the softer it gets. Prayer flags are iconic in Nepal and you might have seen them almost everywhere in Nepal. You can buy these prayer flags here in Thamel. In the evening, you will be taken to a local restaurant to try Nepalese cuisine. The restaurant also provides cultural entertainment in the form of some popular local dances.

Nepal also offers mountain flight service which you can opt for. It offers tourists with the opportunity to get a peek of the majestic Himalayan regions including Everest. The flight is an hour long and usually operates in the morning.

After breakfast, you will check out of the hotel. Since you have a few hours to spare before your flight, let’s make the most of it. Today you will visit Pashupatinath and Boudhanath for some spiritual experience.

Pashupatinath is one of the 8 UNESCO World Heritage Sites in Nepal. It is one of the most important religious sites in Asia that attracts hundreds and thousands of devotees every year. Standing on the banks of Bagmati river, it stretches on both sides of the river, making it the largest temple in Nepal. The main Pashupatinath Temple stands in the centre of Deopatan, a village 3km northwest of Kathmandu. It is a square, 2 tiered pagoda temple with copper roofs and silver plated doors on all sides. Non hindus are not allowed to enter this main temple. Death is present in every in every corner of the temple because of the cremations of hindus that take place. It is believed that those who are cremated here are reborn as humans regardless of the sins they commit. Boudhanath Stupa is another religious and holy in Nepal. Unlike Pashupatinath, here people who practice Buddhism flock the place.  Stupas like this play an important role in developing as well as preserving the religion. The stupa, a golden quadrangular tower is supported by a white washed dome that rest on 3 levels of ascending white platform in the form of a mandala. The tower has 13 levels that represent the stages of enlightenment. The white platforms symbolize the Earth and hear you will hear Kora chants of the prayers. It is said that Buddha’s bone (Stabil) is buried in the center of the stupa.

After the tour of these places, you will have your dinner at a local restaurant and then make your way to the airport for your flight back home. 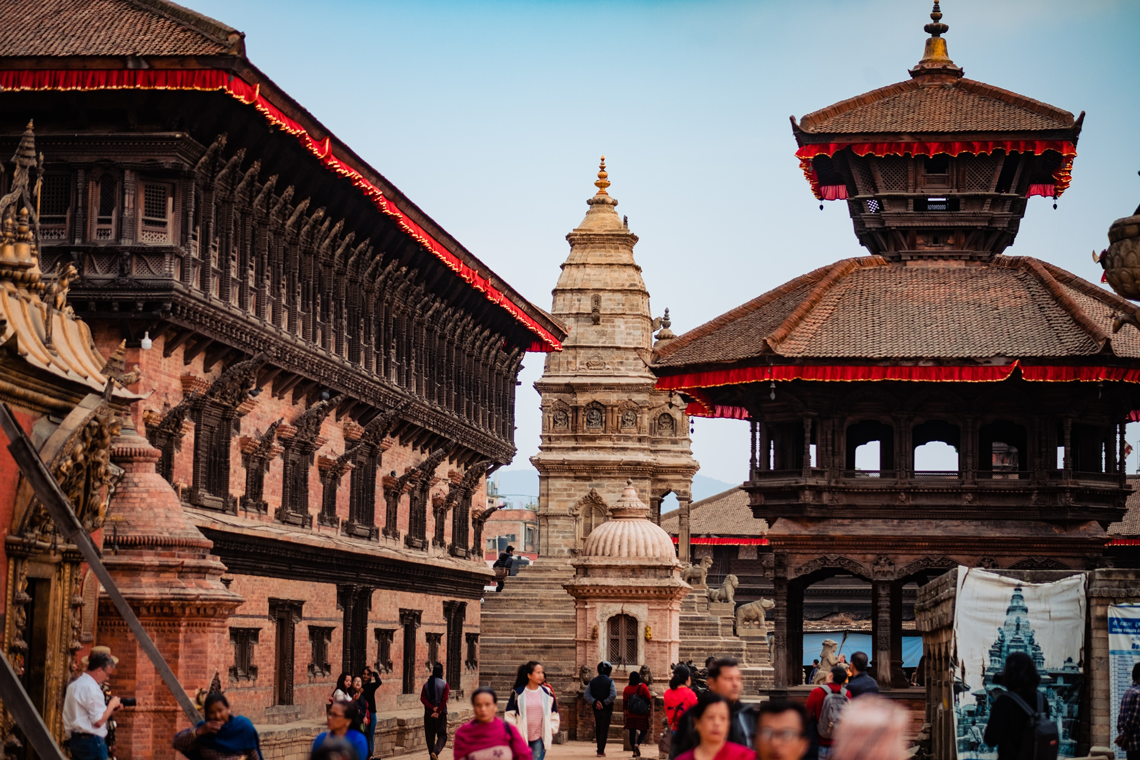