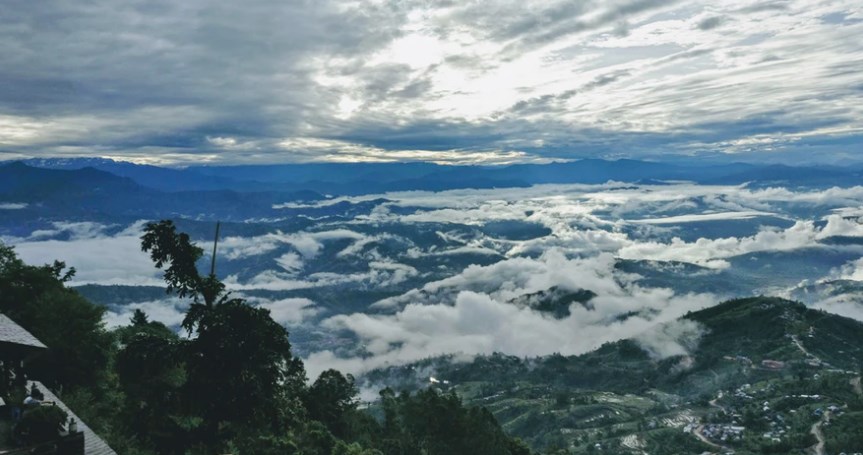 Welcome to Kathmandu, the land of Everest. Upon arrival at the Tribhuvan International Airport, our representatives will pick you up in our private vehicle and take you to Hotel Soaltee Crowne Plaza where you will be spending the night

After breakfast, you will be transferred to the airport to catch a flight to Pokhara. Once you arrive, you will be taken to your hotel and lunch will be served. Pokhara is the second largest city in Nepal after Kathmandu. It is one of the best places for a holiday as it has everything you would want from spectacular sceneries, adventure activities to limitless accommodation and dining options. You can take a relaxing stroll around Phewa lake, the second largest lake in Nepal and you will find many wooden boats that are great for a short tour around the lake. During clear weather, you will see the reflection of the Himalaya peaks on the lake surface. Devi’s Falls is one of the many places one can visit. A rather unnatural phenomenon occurs here, the stream of Pardi vanishes underground. It was originally called David’s fall but somehow adapted to native tongue to become Devi’s fall. There are stories surrounding the lake that a Swiss couple was swept away by the waters when the dam overflowed on Phewa lake. Another place to visit is the International mountain museum, dedicated to the mountains of Nepal. Inside you will get to learn more about the Himalayas from its geology to history. You can also visit the World Peace Pagoda. As the name suggest, it is truly peaceful and a perfect escape from the bustling city. The gleaming white stupa was constructed by the Japanese Buddhists is one of the 80 peace pagodas in the world. Perched on a hill which commands the best views of the Himalayan peaks as well as the Phewa lake making it a popular tourist destination. These are some of the many options of places to visit in Pokhara.

We will start the morning with an early morning drive to Sarangkot. Lying at an altitude of 1592m, it is a popular tourist destination to catch the stunning sunrise and get a magnificent view of the mountains and the valley below. Hues of yellow and orange will dance over the Annapurna range leaving you awed at the beauty. You will have to hike for about 2 hours to reach the top. After sunrise, you will be taken back to the hotel for breakfast. Once you finish your breakfast, you will be taken to Naudanda and from there you will hike to Kaskikot. You will have your lunch at Himalayan Deurali Resort that offers panoramic view of the Himalayas. After lunch you will be taken back to the hotel.

After breakfast, you will make your way to Syangja gate and then hike to Ramkot for 3 hours. Ramkot is a traditional Magar village that has the last of the surviving thatched-roof houses. From this village you can enjoy the view of some of the mountains like Dhaulagiri, Annapurna and Machhapuchhre. After the hike, you will be taken to the lakeside for lunch. Once you are done with lunch you will be driven back to your hotel and dinner will be provided at the hotel itself.

You can start your morning with an Annapurna Mountain flight which is completely optional. This flight is best for people who are unable to trek to the Himalayas. You will get to see Mt.Dhaulagiri, Mt. Machhapuchhre (Fishtail), Mt. Lamjung and Mt. Manaslu. It offers tourists the opportunity to get a peek of the majestic Annapurna range. The flight is half an hour long with a guaranteed window seat. After breakfast, you will make your way to Tilhar and trek to Pumdikot and enjoy the view of the Himalayas. This trek should only take 3.5 hours after which you will be taken back to you hotel.

Today will be your last day in Nepal and you will have to depart Pokhara and catch a flight to Kathmandu. You can relax in your hotel room or squeeze in a visit to at least one tourist hotspot of the city. You can visit Thamel Marg. Thamel is probably the most popular tourist spot amongst not just tourists but the locals as well. There are tons of restaurants to chill in, souvenir shops, and hiking stores. You will even face street vendors trying to sell all kinds of trinkets. If you would like to buy some souvenirs, you can check out pashmina scarves which are a staple in Thamel. These scarves are made from hair of the goats found deep in the Himalayas. The more goat hair there is, the more expensive it is and the softer it gets. Prayer flags are iconic in Nepal and you might have seen them almost everywhere in Nepal. You can buy these prayer flags here in Thamel. You might want to start making your way to the hotel now to pack your things and make sure you are ready to check out by 5pm. After that you will make your way to a local restaurant for your last meal in Nepal. After dinner you will taken to the airport for your flight back home.